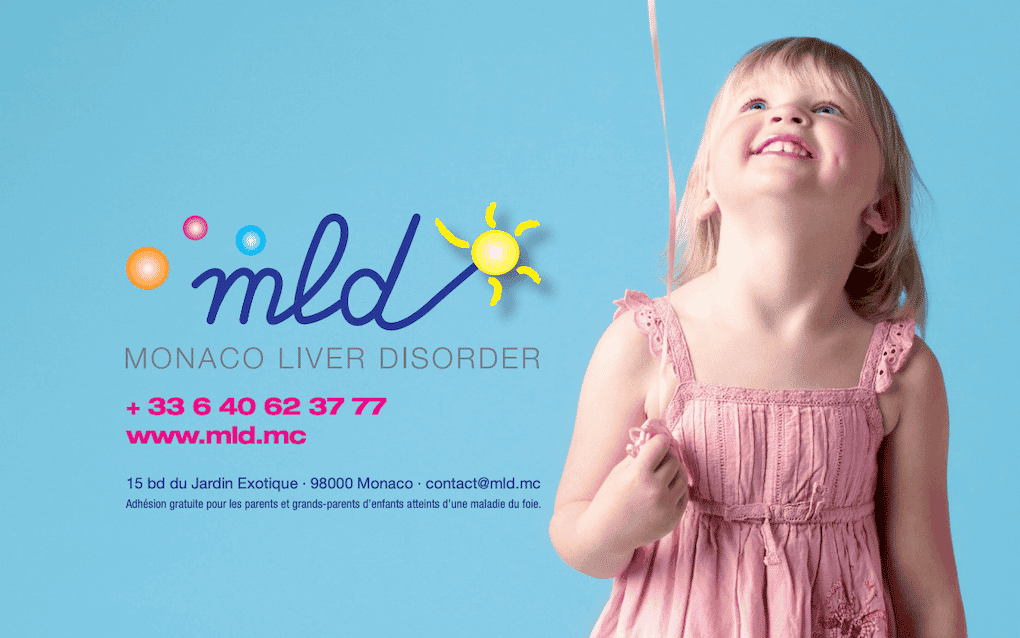 MLD, whose Honorary President is Princess Charlène, is the only Monegasque charity to represent all childhood liver diseases in the Principality.

This month’s article in our series about charities in the Principality and on the Riviera, focuses on Monaco Liver Disorder, created in 2011.

A balloon, a sun and a smiling child. At Monaco Liver Disorder, hope reigns supreme. The charity, founded by Carla Fadoul Shechter, has some 60 members, and works with children with liver disease and their families. But always with smiles and compassion.

The founder and president of Monaco Liver Disorder is fighting to support research, but also and most importantly to enable parents to be close to their children when they are hospitalised, in particular through parent & child rooms in hospitals.

“The aim of the association is to support research, but also to improve paediatric services. For example, we are renovating three paediatric wards at L’Archet 2 Hospital in Nice. This is a first for a charity: we do bespoke work,” explains Carla.

Foldaway beds, material, equipment… Everything is carefully selected and purchased directly at source to ensure comfort and quality for both caregivers and patients.

Better support for children and families

The aim of these top-flight treatment rooms is to provide better facilities for the parents of sick children and to enable the hospital staff to work in excellent conditions. “It can help with recovery, even if they’re not magicians. You can have the best doctors, but if your child’s body doesn’t want to respond, it won’t. But a multitude of little things can help, it’s part of the therapy. We are creating parent/child rooms at L’Archet 2 in the neonatal, paediatric intensive care, and oncology and rare diseases departments. These three departments cover the PACA region, Corsica and Monaco ,” explains Carla.

In the Principality, on the other hand, we will have to wait a little longer to see such a structure being built. And while Carla already has an idea in mind, she can’t say too much about it for the time being.

Last but not least, the charity raises awareness about organ donation. “All of us might need it some day,” Carla says. “Each body can donate up to seven organs. And the number one organ transplanted in children is the liver.”

And of the liver diseases that develop in childhood, the most common is biliary atresia (BA) – or jaundice. With 1 case per 18,000 births in Europe, it results in an obstruction of the extra- and intra-hepatic bile ducts.

If left untreated, it will lead to the death of the child before the age of three. Hence the need to act quickly, but also to recognise the warning signs from day 1 of the baby’s life (notably, a discoloration of the stool and dark urine). “The sooner we start treatment, the better the child’s chances of recovery,” says Carla.

And the more the parents are present, the more likely the child is to get better. Although, again, there are no guarantees when it comes to health, Carla Fadoul Shechter insists that hope, love, kindness and good spirits can prove extremely beneficial to recovery.

How can we help?

Already supported by the Monaco Red Cross, AMADE and the Princely Government – and in particular Princess Charlène, the charity’s Honorary President – Monaco Liver Disorder’s volunteers now hope to obtain financial support from the French authorities. “We are a Monegasque charity that operates mainly on French territory, and the project is Franco-Monegasque”, Carla points out.

“We hope that the French authorities will eventually come forward. Monaco, on the other hand, is extremely generous. We would also like to increase the number of memberships, as becoming a member means showing willingness to be informed of the charity’s activities, to support its actions and to actively take part by voting at the AGMs.”

Private donations (60% tax-deductible for companies and 66% for individuals) and memberships can also help enormously. If you wish to contribute, you can make a donation or become a member (for 20 euros per year):

By bank transfer to Crédit Agricole :