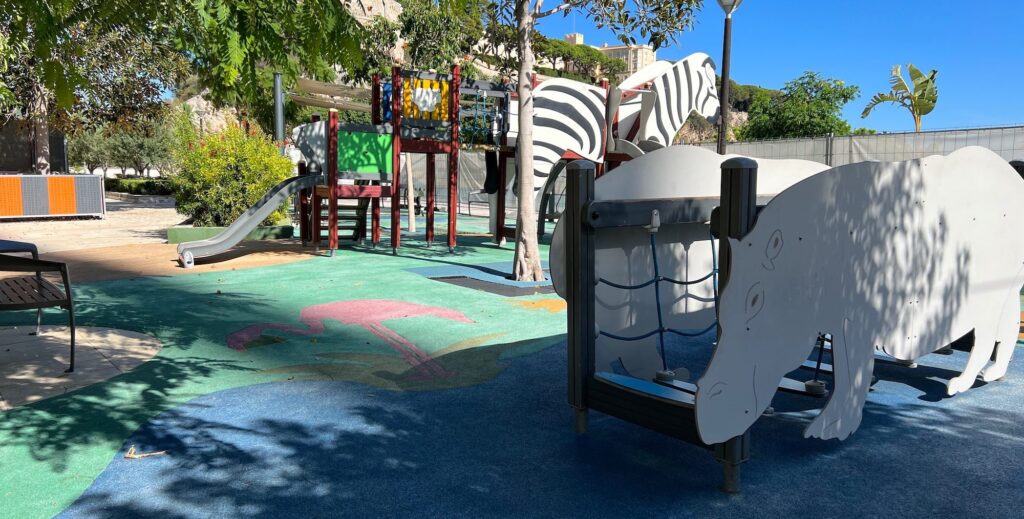 Let’s take a look at five playgrounds in and around Monaco, to visit or revisit with the children.

Our first is in the Principality, in Rue Augustin Vento. Three separate play areas are tucked away on the right of the little alley, next to the “Le Stella” building. One of them is pictured below. In total, 220 square metres are available for children aged 1 to 6 years. The playground is quiet and in the shade for part of the day: a blessing on the very hot days we’ve been having, even in September.

A kilometre further on, at the end of the Saint-Honoré promenade, is a well-equipped playground. A zebra slide, a hippopotamus platform and spring-mounted games (suitable for children with reduced mobility), occupy this 188 square metre area. Despite appearances as it is currently surrounded by fencing, the playground is open and accessible. It also has benches and lush vegetation, making it a pleasant spot for all ages.

Now let’s head to Beausoleil, Monaco’s neighbouring town. You may be tempted to go by car, as it is located towards the top of the town, in the André Vanco sports complex. It is located next to the petanque grounds and provdes a number of amenities including several play structures and two swings. The town’s second playground, located in the town centre on Avenue Verdun, is still under construction.

Back down we go to Monaco, and two little playgrounds. One, on rue Princesse Caroline, is kitted out with a fire engine and a spring-mounted game that is suited to children with disabilities. There are also many benches. The other is located above the Post Office and has three games on springs. It is a quiet spot but be warned! It is in the sun most of the day.

Our journey’s end is in Cap d’Ail. In addition to the popular playground on Marquet beach, there is a quieter one in the upper reaches of the town. Next to the Samuel Paty nursery school, this 100 square metre playground is ideally situated for after-school fun. There are several spring-mounted games and a climbing frame.