Are coconut husks the future of interior design? 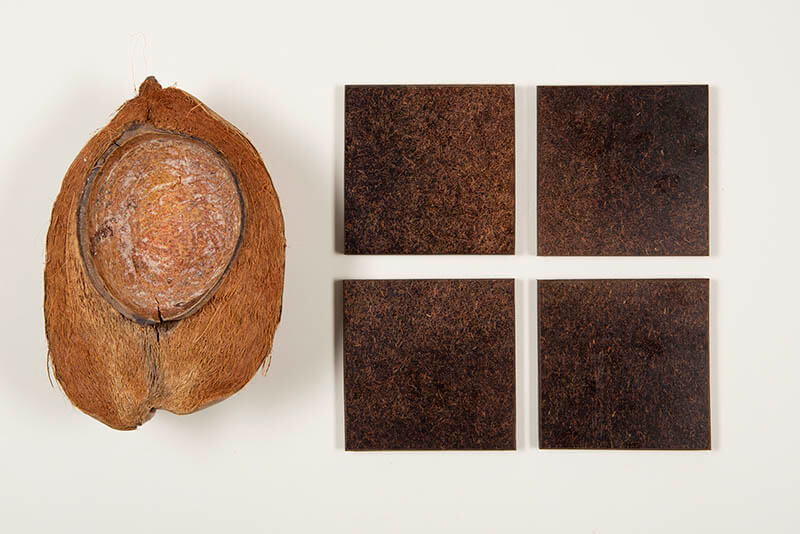 Coconuts. You eat them, you drink them, and they might soon become your latest living-room staple. Meet Goodhout, the start-up filling the market gap for long-lasting sustainable materials by transforming coconut husks into a multi-purpose board that keeps on turning heads.

“It’s either the best thing I’ve done in my life or the silliest,” says GoodHout founder Silvia ten Houten. “When I came up with GoodHout any sense of restlessness I had about my purpose in life completely disappeared.” Yet financially, it was the most unbalanced time of her life. “I lived out of a suitcase at some point,” she says. “And I never was unhappy. It was the weirdest thing. How can your life be so insecure and yet you feel so at peace?”

Finding a goldmine in coconut husks

Before Silvia ten Houten lived out of her suitcase, she took a trip to Indonesia.

Ten Houten spent her early childhood in Indonesia, grew up in New-Zealand and studied in Holland, where her father is from. When she finally went back to Indonesia, she hadn’t been to her mother’s country in over twenty years.

What do people do with coconut husks? I literally googled it

Silvia ten Houten speaks of her Indonesian homecoming in Proustian terms: “The people, the smells, the food, the language – it was all so familiar. And I wanted to find a way to continue to be involved with Indonesia.”

Coconuts seemed a good starting point for a business. Indonesia is the world’s largest coconut producer and has an estimated 3.6 million hectares of coconut plantations. After briefly considering going into coconut water – “It was a marketing stint, it didn’t tickle me” – Silvia ten Houten becomes intrigued by the enormous amount of coconut husks that are lying around Java, her mother’s island, wasting away in the sun for everyone to see.

Did you know? In 2018, Indonesia produced an estimated 18 million tons of coconuts. The large majority of coconut husks are burnt after the white meat, called copra, has been extracted for food.

“What do people do with coconut husks? I literally googled it.” Silvia ten Houten conveniently discovers that a Dutch university has developed a technology that recycles coconut husks into a durable material. However, the technology hasn’t been commercialised yet, a potential a red flag. So, she spends a year researching the catch.

Is there a problem with the supply chain? Are the coconuts diseased? After a year of research and still no catch in sight, Silvia ten Houten has no choice but to dive into the project. “I’ve learnt that with start-ups, you just have to wing it,” she says. And so begins a period of back and forth between the Netherlands and Indonesia, and a living-out-your-suitcase kind of lifestyle.

>> READ MORE: CleanEquity: How impact investment took off in Monaco long before it was a trend

What can be made with coconut husks?

In 2020, Silvia ten Houten is no longer living out of her suitcase. GoodHout has taken the technology from the Dutch university, improved it and patented it.

This is durable stuff. A coconut husk table can last decades. We want to create products that can be passed down in the family

At the moment, GoodHout produces coconut husk boards that are 30x30cm. The boards can be used for various kinds of product designs, such as knife handles. An Italian company is currently making belt buckles out of the boards.

Larger boards, 60×120 cm, which can be transformed into furniture, such as tables, are expected to come out by the end of March 2021. “This is durable stuff. A coconut husk table can last decades. We want to create products that can be passed down in the family.”

GoodHout is taking over the interior design and furniture market at a convenient time. The design industry expects the 2020s to be centred around simplicity and sustainability, two boxes that GoodHout ticks. Well-known design critic Aaron Betsky projected last January that the 2020s would see a “return of the real”, a shift that Coronavirus has only fast-forwarded.

GoodHout Coconut board is a dense, strong, and 100% natural material that looks like a brown version of ebony. It is also naturally flame retardant. In fact, to get wood to the same level of flame retardancy, you need to use toxic flame retardants.

Investing for the future

You must look at business holistically, insists Silvia ten Houten. She is therefore looking to set up an educational charity for the children of GoodHout farmers and factory workers: “because there is no reason why you aren’t able to pull money out of your profits to be able to set up a charity”.

In return, she will ask the children who have benefited from the charity to come back and teach for a year or two. “If they want to go to school, money should never come into question. It’s even a dream of mine that in 20 years’ time one of the children finishes at medical school. I think that would be beautiful, it would really make me feel like we’ve achieved something special.”

Are there other dreams? “I want GoodHout to be one of those companies that everyone wants to work at because they know that by working there, they are helping the world become a better place.” She pauses. A moment of hesitation. Actually, that’s not the full story, says her smile. “Truly my goal with GoodHout is to be the most successful social enterprise ever. I want to get into the strategy books.”

GoodHout is the runner up in Excellence in the Field of Environmental and Technology Research at CleanEquity 2020.