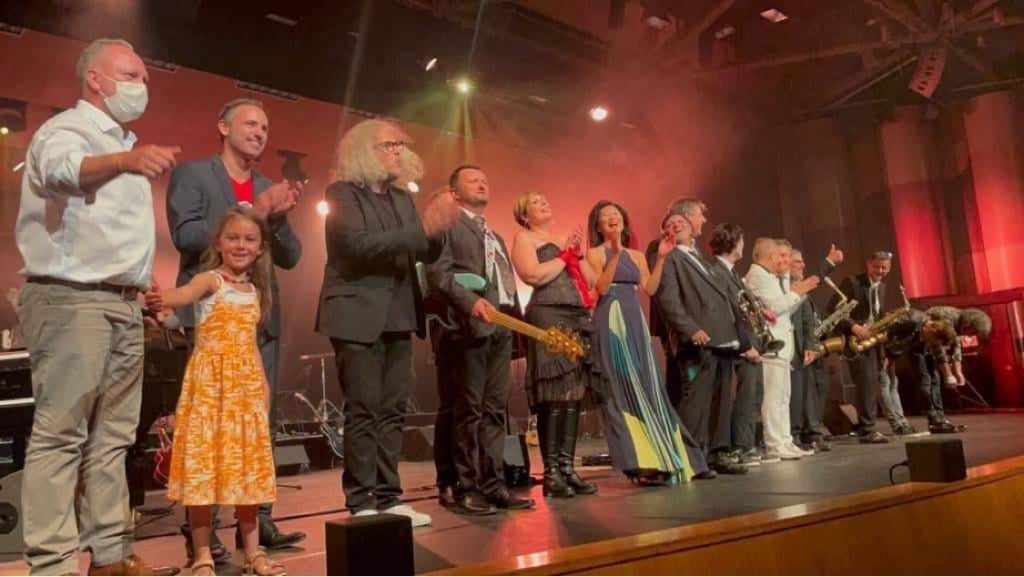 Under the purple hue of the stage lighting, saxophones, tambourines, and electric guitars waited patiently for their musical maestros to take to the stage. Once the 250-strong crowd took to their seats and the clock struck eight, Jungle Boogie rang out around the room as musicians burst onto the stage.

Talents from the world of music

Amongst those starring on the bill were harmonica-playing Greg Zlap, who accompanied Johnny Hallyday from 2007 to 2017, and pianist Yvan Cassar, known for collaborating with the likes of Celine Dion. Taking time out of her busy schedule with the Monte-Carlo Philharmonic Orchestra, violinist Zhang Zhang also adorned the stage with her violin.

For Greg Zlap, there was no question that he would come and perform. As soon as he received the call earlier this year, his first words were “yes of course, I’ll be there straight away.”

After being on pause for a year, the river is finally flowing again

Passionate about using music to make a difference, he already does a lot of work with schools and disabled children, even visiting asthma patients in hospital. “Playing the harmonica allows them to coordinate their breathing and improve the technique needed to use their inhalers.”

A glimpse of normality

“There was so much energy, we were dancing in our seats,” commented one young girl in the audience. Clapping and cheering to Pulp Fiction’s the “Son of a Preacher Man”, amongst many other Tarantino classics, this event was a welcomed return to normality, supporting a “very good cause”, after such a difficult year.

For violinist Zhang Zhang, it was a feeling of “pure joy” to be back playing in front of a live audience. “After being on pause for a year, the river is finally flowing again.”

The power of music

After losing his son to brain cancer seven years ago, Denis Maccario created Monaco’s first ever organisation to raise money for research into paediatric cancer and rare diseases. Postponed twice throughout the year, Friday evening finally marked the Fondation Flavien’s third fundraiser concert, boosting the total funds raised since 2014 up to 643,000 euros.

As scientists at Monaco’s Scientific Centre strive to find treatments and cures, the recent discovery of a new molecule proves research efforts are paying off. Known as Axitinib, experts have identified this molecule as a potential treatment for brain tumours and money from the concert will fund the further research and clinical trials needed to assess how well it works.

“A beautiful tribute” was how Adrien, a student from Nice, described the concert. As musicians took a bow and the room erupted into applause, the standing ovation would suggest he was not the only one touched by the evening, dedicated to the late Flavien.

If you would like to support cancer research and make a donation to the Fondation Flavien, you can do so via their website.