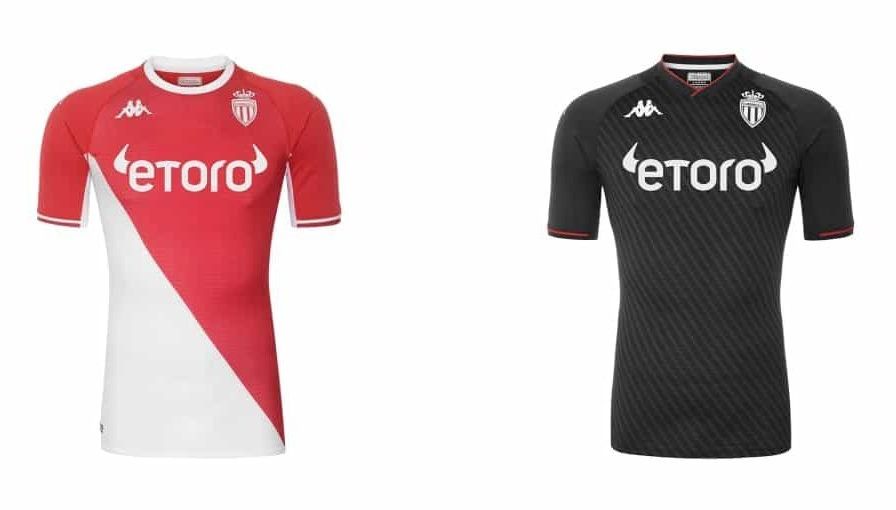 AS Monaco and Kappa have officially presented their new home and away kits to be worn by the Monégasque players during the 2021-2022 season.

Following the announcement that eToro, the club’s new main sponsor, would feature on the Ligue 1 jerseys this season, AS Monaco have now unveiled their kit for the 2021-2022 period.

Just a few weeks after revealing their new identity, based around their new brand RISE.RISK.REPEAT., the Principality’s club unveiled their Home and Away jerseys this Thursday with their kit supplier Kappa. It was via a video, featuring players from the first team and the Academy, accompanied by Belgium rapper Krisy, that AS Monaco showed fans the new design.

Changing the diagonal to a 55° angle

For their third consecutive collaboration, AS Monaco and Kappa have come up with a jersey incorporating the historic diagonal design, using a new shade of red known as “tango red”. Designed by Princess Grace of Monaco 61 years ago, the iconic diagonal will remain on the jerseys, but will appear at a 55° angle on the front of the shirt.

Complimenting the red, the other half of the Omni jersey is in a white monochrome, and these two colours are also used for the club’s crest. The Monégasque crown appears on the back of the shirt, on the round neck collar. On the inside of this collar are the words, RISE.RISK.REPEAT, ASM’s new brand. Completing the kit is a pair of red shorts and white socks.