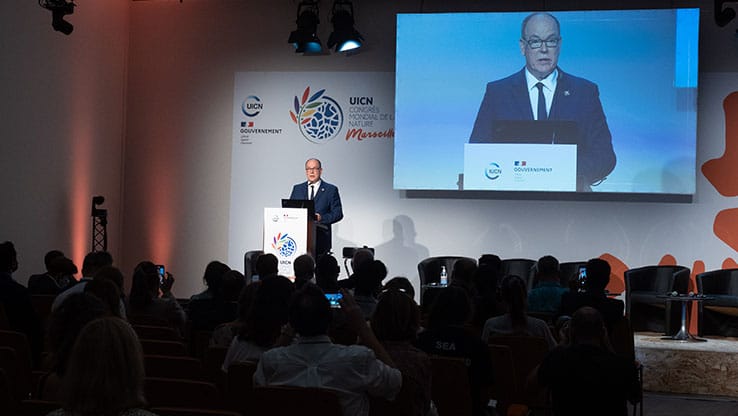 On Tuesday 7 September, Prince Albert II  spoke to the assembly at the World Conservation Congress, at Parc Chanot in Marseille.

“Who will be able to explain the sea’s importance to our peers? Who will convince them to save the ocean before it is too late? Who will make them understand that their lives are at stake?”  It is through these weighty questions that Prince Albert II made his contribution to the World Conservation Congress.

This event, which is taking place until Saturday in Marseille, and is organised by the International Union for Conservation of Nature, aims to draw the whole world’s attention to the necessary preservation of the environment.

The sea, “a lawless domain”

In his speech, Prince Albert II chose to alert his fellow citizens to the crucial need to protect our seas and oceans. “How can we ignore the dramatic effects of the decline, pollution and destruction of marine ecosystems on human health?” he asked the audience.

The Prince then reminded the audience that each human being consumes on average more than twenty kilos of fish per year, a figure that has risen significantly over the last few decades. With the problems of intensive overfishing and pollution that we are all aware of… “The sea remains today, for the most part, a lawless zone,” the Sovereign deplored.  We hope that his moving speech will help to bring about change.

>> SEE ALSO : How can Monaco’s biodiversity be preserved?