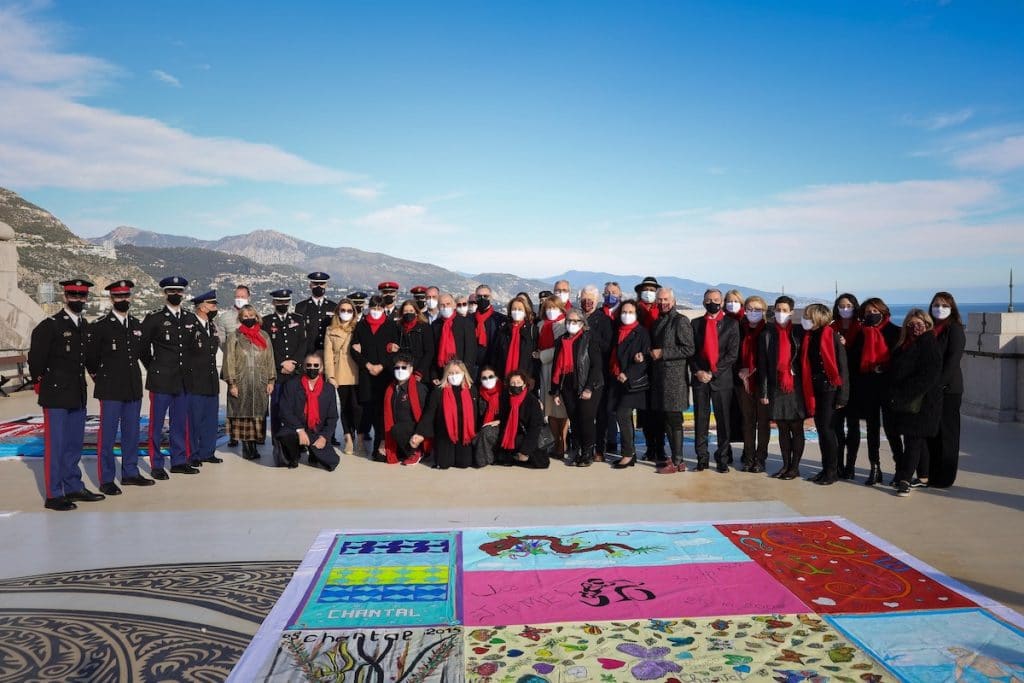 On the occasion of World AIDS Day, set on December 1 by the World Health Organisation (WHO), the Fight Aids Monaco charity visited the Prinicipality’s Oceanographic Museum this Wednesday.

For the 10th year, Fight Aids Monaco and its president, Princess Stéphanie, paid tribute on Wednesday, December 1, to those who have died from HIV.

Eight quilts were then unfolded on the terrace of the Oceanographic Museum, in the presence of many personalities, such as Camille Gottlieb, members of the Prince’s Government and of the National Council, or the Compagnie des Carabiniers du Prince and the Monaco fire brigade.

A minute’s silence was then observed, in memory of the victims.

“It is always a very emotional moment, hearing this long list of names of people who have died from HIV… It’s the story of HIV too: discrimination, stigma. The quilts are made to replace a gravestone or a shroud. So as not to forget people just because they died of HIV. (…) It also helps remind us, especially at the moment, that HIV is still around and that we must still continue to fight, and fight against inequalities,” Princess Stéphanie told Monaco Info.

The Princess also stated that Covid-19 should not make us forget the spread of AIDS, regretting a lack of knowledge and prevention, especially among the youngest people around the world: “HIV has no borders : it can affect anyone, anywhere”, she stressed.

Princess Stéphanie is launching a fragrance to support the charity

In addition to the display of quilts, Fight Aids Monaco strives to help and support HIV victims and their families on a daily basis.  An “ALTER FOR SELF-ESTEEM” parade is organised this Thursday, December 2, at 7 p.m., at the Monaco Boat Service, 8 Quai Antoine 1er. A charity parade, organised for the benefit of  Princess Stéphanie’s charity, but also cancer charity “Écoute Cancer Réconfort”. Entrance tickets are being sold online for 30 euros.

At the same time, Princess Stéphanie and perfumer Laurent Mazzone have just launched their new creation: the “Princesse de Coeur” perfume. A fragrance blending scents of rose, iris, white musk and patchouli. The profits from the first 800 bottles will be donated to Fight Aids Monaco. The perfume is sold exclusively at a price of 395 euros on the lmparfums website, as well as in LM PARFUMS approved points of sale.