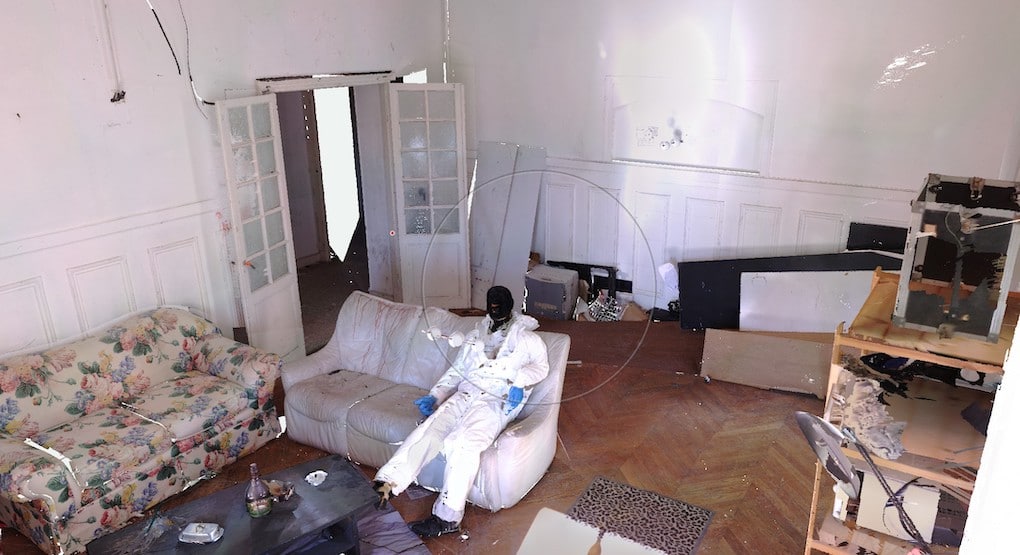 A 3D scanner, 360° camera and new biometric identification terminal are now part of the scientific section’s ‘toolkit’. With this new cutting-edge equipment, the Forensic Police will be able to make significant gains in terms of time and accuracy.

It almost feels like being in a video game. A series of three-dimensional images is displayed on the Monaco Forensic Police Department screen. These are 360-degree fake crime scenes that are so precise they look like they have been taken by a camera. But this is not the case.

What we are seeing are the stunning results produced by the new 3D scanner that the Police Department’s scientific section acquired last autumn. The scanner replaces the usual photographs with a complete image and the software then calculates the precise distances and scales between all the objects in the image.

The 3D scanner measures everything in minutes

Used initially in the construction industry as an aid for architects, this FARO scanner has a range of 70 metres. Clouds of points are captured within this radius to model the scene, then digitally converted into a 360° image. It takes between two minutes to an hour and a half, depending on the desired resolution, to obtain an accurate, full-scale image.

According to Commandant Carine Micquiaux, head of the forensic department, her deputy, Christophe Khemila, and the entire forensic team, this new device has quite simply revolutionised the way they work.

“It’s a huge time saving, since it allows us to visualise, freeze, make 2D and 3D views, with a great degree of accuracy for all the objects we want to include in the scene,” explains Commandant Micquiaux, who was able to test the device on workplace accidents.

“Up until now, we took as many photos as possible, and all the measurements we were interested in had to be taken manually,” adds Christophe Khemila.  “We might miss out on some useful measurements, whereas now we can reconstitute everything with 0.3 mm accuracy.”

This information is also very useful for the legal aspect: “It is much more visual for the magistrates who do not come to the scene, or for the investigators who take over the case. It gives you a much more realistic view of the scene, you can imagine yourself in it. You don’t get that with photos”, says Carine Micquiaux.

Thanks to state-of-the-art software, forensic teams can work remotely and yet feel like they are at the scene. Officers can move around virtually and observe and analyse specific points, which are then captured directly and included in the image.

An additional feature even makes it possible to move elements, such as the trajectory of a revolver bullet, or people, to create a reconstruction.

SEE ALSO: “Even we are surprised by such low figures”: the three key figures for security in Monaco

A 360° camera to move around ‘inside’ the image

In addition to this revolutionary scanner, the Forensic Police is also now equipped with a 360° camera. Here, there are no clouds of converted points or measurements: photos are taken directly at the scene.

Faster and easier to use than the scanner, the Theta camera makes it possible to take a 360° photo and to move around within it (following the camera’s movements), just like in a virtual property tour simulation.

“We don’t need the scanner for certain investigations. Before, we had to make a whole printed photo album, so that the judges and investigators had a feeling of immersion in the scene. It was very complicated, sometimes the albums had 140 photos and it could be quite difficult to understand the scene,” explains Christophe Khemila. The two tools therefore complement each other.

A terminal for comparing fingerprints accurately

Another piece of cutting-edge equipment for the Police Department is an Idemia biometric identification terminal, which is used for taking fingerprints, replacing a ten-year-old system.

Gone is the black ink pad we see in police series: here, the device acts like a photocopier and scans fingers and palms in great detail, laid flat and on their sides. Automatically linked to the photos of the individuals under investigation, the prints are then transferred to a piece of software.

The terminal then compares the prints from the scene to the scanned fingerprints. However: the machine cannot replace manpower! The minutiae (i.e., the irregularities in the fingerprints, which are specific to each individual) must still be recorded by the experts, as twelve minutiae are required to confirm an identification.

“If our database ‘knows’ the person, the machine will recognise them right away just from their fingerprints,. Taking the prints is more time consuming, but also more accurate, ” says Commandant Micquiaux.

And while the system is slightly more complex, it is also modular. The iris of the eye, for example, could also be added in future.