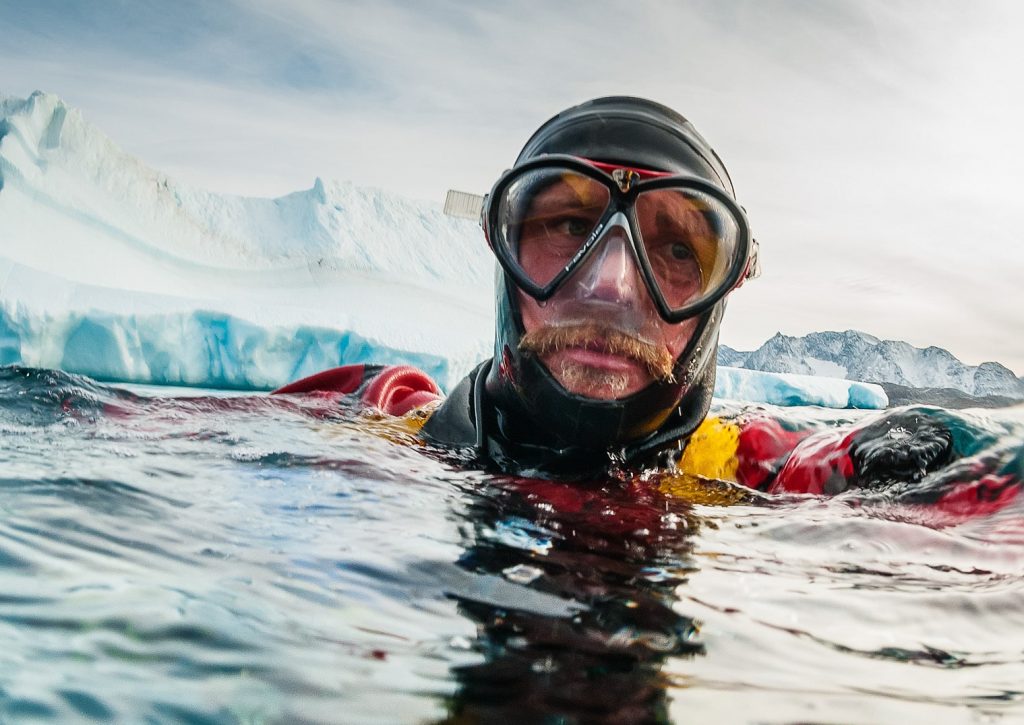 For the fifth instalment of our series “Heroes of the Mediterranean” meet a man passionate about the Arctic and determined to protect our planet from the threat of rising sea levels.

“It wasn’t the place for me. I felt trapped, like I had no freedom…” Casting his mind back to his youth, he doesn’t recall his school years fondly. “I would look outside. I would write. I would dream and imagine life.” He spent most of his day staring out of the window, completely lost in his thoughts. Daydreaming was his escape from education’s four walls. Alban Michon knew only too well that school wasn’t for everyone. “I already knew that I wanted to be a diving instructor when I grew up.”

When freed from the confines of the classroom, he pursued his interest in diving. He learnt the art all by himself. “I fell in love with it. Although, that’s nothing new. I’m always falling in love,” he says with a smile. “The feeling of being underwater is incredible. I feel weightless… it’s as if I’m flying.”

A love for the Arctic

As a child, Alban Michon (now aged 43) always loved the sea. He delighted in spending his summers on the Giens peninsula near Hyères. Currently residing in Hyères, a town in southeastern France, he lives not far from the Mediterranean coast where he spent his youth. “I went every summer with my parents. I was drawn to the sea. I often gazed out over to Cousteau.” Born in Troyes, far from the coast, in the north-east of France, he discovered his love of the ocean through books. However, the pictures on the pages soon came to life. Michon qualified as a diving instructor in 1999 and spent summers diving in Corsica and off the Mediterranean island of Port-Cros.

“I spent all my time diving. Slowly but surely, I began diving under ice.” At just 22 years old, he became the owner of the Ice Diving School in Tignes. Following this, Jean-Louis Étienne, a famous ocean explorer, gave him the opportunity to have his first expedition. “I wanted to explore the polar regions. It was by diving in places like the Arctic, Canada and North America that I found my passion for sea ice.”

He desperately wants to see it again before it disappears. As he explains his passion for the region, his face lights up. His love of the deep blue is obvious. “I like everything about the Arctic. The colours, the geography, the atmosphere. The smell of the cold too! I’m very sensitive to that, to the light too. Here (in the conference centre that is the Grimaldi Forum in Monaco, editor’s note) I’m too hot, it’s too crowded. It’s hellish (he laughs). It’s hard to explain. Being underwater is so freeing. The freedom is what I love the most. I have this need to escape. When I dive, it’s so intense, it takes me several years to get over it. Whenever I’m not diving though, I feel this huge pull to be back out there.”

Melting sea ice: a symptom of a sick planet

The Arctic has become Alban Michon’s second home; It pains him to see the ice melting. “For ten years now I’ve been observing the changing sea ice. You don’t need to be at the Poles to see that it’s melting. Not so long ago, explorers were fearful of the sea ice. Their boats struggled to break through it. It was strong, powerful. The sea ice posed the threat, not us. Today the ice serves as a reminder of this past, and then it will also play a vital role in determining our future.”

According to Alban Michon, we can’t deny it any longer. Rising sea levels are a real issue and one we have to face. “What’s happening up there will have consequences for us too,” declares the man who dreams of one day diving on Mars. “The effects can already be seen on coastal towns. The Arctic is changing. Temperatures there are rising twice as fast as in the rest of world. Scientists agree that there will be no more ice in the North Pole in summer.”

All of the world’s islands are at risk of being submerged under water. They are destined to disappear, just as the Maldives are

According to reports from IPCC (Intergovernmental Panel on Climate Change), in a hundred years from now, sea levels will rise by 40cm (or by as much as 1.1 metres if the worst-case predictions are to be believed), with a further increase of 5 metres by 2300. However, despite the bleak data, Alban Michon refuses to give into pessimism and wants to spread a message of hope.

“Monaco and the Cote d’Azur are going to be affected in the near future. All of the World’s islands are at risk of being submerged under water. They are destined to disappear, just as the Maldives are. However, mankind has always been able to adapt to its environment. We are resilient. The data collected from my expeditions will help the future generations. That’s the reason I explore. If we are to protect the future of our planet, we absolutely have to understand our past and how we’ve gotten to where we are today.”