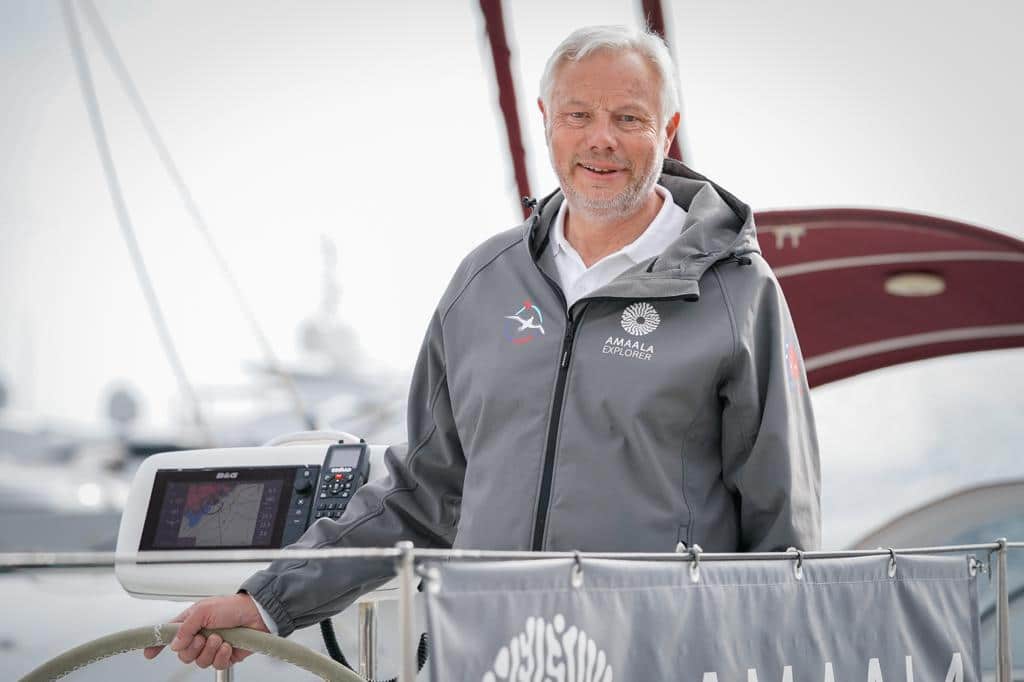 We caught up with French sailor Yvan Griboval just a few days after he completed the OceanoScientific Expedition, a two-week-long scientific expedition in the Mediterranean. For the fourth instalment of our series “Heroes of the Mediterranean” meet a lone wolf with a deep appreciation of Monaco who has dedicated his life to protecting the environment.

Don’t take the sea away from him, or, like a flower without water, he will wilt. “I had a lot of trouble respecting the first lockdown,” admits Yvan Griboval in a whisper. “I tried not to be impulsive, I tried to respect the measures, but I need to be in contact with the sea. It’s where I feel most at home.” Yvan Griboval first fell in love with the sea as a child growing up in Normandy. And it was in Normandy that Yvan Griboval, now 63, found refuge during the first coronavirus lockdown.

“Normandy immediately welcomed me into her arms,” he says, interrupting a story about his late father, a painter and the last impressionist of the Rouen school. “My father used to take me painting everywhere, even when I was barely capable of walking. I grew up on the Normandy coast, where I was always in contact with the Seine and with the sea. My father was also a great river fisherman. Trout was a favourite of his. He even used to fish salmon in the Seine!”

Just because we have material wealth, it doesn’t mean that we are different

From the age of 10, inspired by his father but also sensing a budding interest, little Yvan takes part in fishing competitions, grabbing all the titles he can. “I fished the biggest sea bream, the biggest cod, as well as the largest amount of mackerel.” Griboval’s precocity catches the eye of one of his father’s clients, who offers him his first sea trip when Griboval is just 13. The boat is a sloop-rigged keel boat called a “Requin” – French for shark.

“My father’s client also gave me a book, telling me that if I learnt it off by heart, I could join his crew the following year. I never worked much at school, but I sure didn’t let go of that book,” he says. And so, started the adventure. “That’s how I started sailing and competing.”

An only child, the native of Mont-Saint-Aignan describes himself as “in all sense and purposes, a solitary man.” Griboval’s competitive spirit drives him to pursue sailing, but for a while he also explores  journalism. Sailing races and prizes follow, while the press slowly starts talking about him.

“I would have liked to have taken part in the Vendée Globe, but I missed that train,” admits Griboval. This year, the sailor is backing Boris Herrmann, who is taking part in the solo round-the-world sailing race on board the Seaexplorer-Yacht Club de Monaco. “He is the first professional skipper who actually was interested in my idea, namely equipping racing sail boats with the technology to help scientists study the oceans.”

Now that youthful competition is gone, Yvan Griboval’s dedicates his life to protecting the environment. “Just because we have material wealth, it doesn’t mean that we are different. If we lose our link with nature, we lose a lot. We have a lot to learn from people who live in harmony with nature.”

The idea came to mine during one interminable lockdown day. “At the beginning of the year, because of Covid-19, I started thinking about how the ocean offers everything that humans need to treat themselves and preserve their health. Through biomimicry, we need to be able to replicate what nature is capable of producing without resorting to chemicals.”

To follow-through with his idea, Yvan Griboval, surrounded by a team of specialists aboard the maxi-catamaran Amaala Explorer, carried out a scientific expedition in the Mediterranean last October. The aim of the expedition was to study coral and its exceptional natural resources more closely. “We do not want to loot coral reefs, but rather copy what the coral can do and apply it to human beings to improve well-being and health.”

Griboval’s project was possible thanks to unfailing support from the Principality, Yvan Griboval’s home since 2019. “When I returned from my solo round-the-world trip, I promised the Prince that I would devote the years I had left to helping him in his efforts to preserve the oceans.”

The offer was an immense honour and a source of  pride for the sailor who consider Prince Albert II as his “guide”. “He’s a fantastic man, as we meet few of them on this planet.” Griboval talks of a deep admiration and visceral attachment to the Princely Family.

“When Prince Albert II watches me set sail, or when he is waiting for me on the docks, we don’t need to talk to each other,” he says. “He knows what I’ve been through. Communication between us is ever-present. It’s not just a ruler and a sailor, but an exchange between two men.”

Yvan Griboval finds a similar intellectual depth in Monaco. “At the Yacht Club, I often meet people who are incredibly rich, but who have never forgotten where they come from.” Griboval drives a 2006 Volkswagen Caddy, which he parks amongst Lamborghinis, Porsches, Ferraris, Rolls-Royces and Bentleys.

“I very much value meeting these people, because they have kept a kind of humility that doesn’t take anything for granted. They know that one must fight every day for what one wants. Monaco is often the very opposite of what people make of it. The true Monaco is made up of men and women with strong values.”

>> READ MORE: Albert I of Monaco, Prince of the Seas

>> READ MORE: Prince Albert II and his passion for the seas