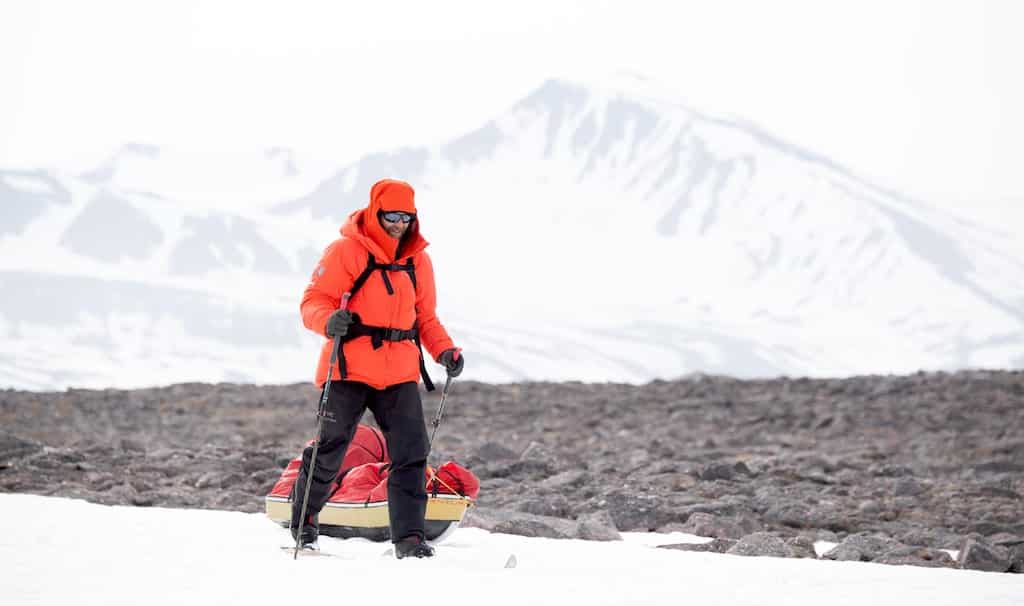 As part of the celebrations and commemorations to mark the centenary of the death of Prince Albert I of Monaco, Gildo Pastor, President of Venturi, sent Xavier Chevrin on a huge mission. On cross-country skis, the Venturi eco-explorer covered more than 220 kilometres on the island of Spitsbergen, Norway, mapped by Prince Albert II’s great-great-grandfather between 1898 and 1907.

The first answer was no. The second one too. “The guides we contacted thought the crossing would be impossible,” Xavier Chevrin tells us as he recalls his journey. “We contacted a third guide, who gave it some thought.”

SEE ALSO: Behind the scenes of the Venturi Antarctica, the first electric polar exploration vehicle

A few weeks later, he called Venturi’s environmental explorer back. With good news. “It’s doable, but not alone,” he said. The relief was immense. “It should be said that these are places where no one has ever set foot,” Chevrin says. “We carried out a lot of work ahead of time, to identify the dangers by satellite, in particular the crevices.”

Only accessible by cross-country skiing

So in the end, it was with three experienced guides and a cameraman that Venturi’s adventurer set out to conquer the mysterious island of Spitsbergen, once mapped from the sea by Prince Albert I. The location can only be reached on cross-country skis.

“It was clear that he had done a precise and thorough job”. Throughout the trek, Xavier Chevrin and his team discovered places that were named after the Principality. Starting from Grimaldi Mountain, they crossed the Monaco Glacier (a major first; the Monegasque flag now flies there), then reached Prince Albert I Mountain and finally Princess Alice Mountain.

SEE ALSO: Alban Michon, arctic explorer and extreme diver, fights to save the planet from drowning

“These place names date back to several expeditions by Prince Albert I”.  A historic mission of exploration to this island was carried out at the beginning of the twentieth century, and sealed the friendship that Monaco and Norway still maintain today.

Face to face with a polar bear for several minutes

On site from the end of May, Xavier Chevrin and his small team had a rich and testing experience, with temperatures sometimes close to -15° and a constantly grey sky, with blizzards, rain and only a few bright spells. “I called it fifty shades of gray!” Near the North Pole, the five men were able to admire the midnight sun, a phenomenon that is only visible above the polar circle, where the sun never sets around summer solstice time.

“This forced us to follow a specific routine, which involves being awake all the time,” smiles Xavier Chevrin, who took turns with his companions every night on a compulsory nightly patrol due to the risk of attacks from local wildlife.  “We came across a few birds, seals, and even what we call the blue fox. It is an extremely rare polar fox, which has undergone a genetic mutation and whose fur is black, almost blue.” But that’s not all.

SEE ALSO: Monaco, a major player in preserving the poles

One morning, as he was brushing his teeth, one of the few personal hygiene activities that were possible during the excursion, the Venturi eco-explorer saw a huge mass on a small hill at an altitude of 100 m. A reindeer? Not this time. “It was a polar bear, coming down straight towards us.” The largest predators on the island, polar bears are an extremely protected species in Norway, but can pose a great threat to explorers.

“In the end he lay down in the distance, without coming near us.”  But the next morning, while he was asleep, Xavier Chevrin heard a voice, a shout, like a warning. “I opened my eyes and one of the two guides had pulled out his rifle.” The bear was standing right in front of them with its jaw hanging open. “I got out of bed in a split second. We tried to make some noise, with pots and pans, to scare him away. But it didn’t work.” In the end it was the deafening noise of fireworks that drove the animal away.

A vivid memory, like the lakes of water formed by impressive streams of melting show. These are new phenomena that have only become visible over the past few years. “Ice was also conspicuously absent from the Spitsbergen cost, even though we were only 1,000 kilometres from the North Pole,” said Xavier Chevrin. “The island is rising nearly two centimetres per year.”

SEE ALSO: Olivier Anrigo: “Photography is in my DNA”

In the heart of a protected area, the five explorers left nothing on site, taking away with them the little waste they had accumulated during their three week stay. An unforgettable mission, which ended with a final push on 26 June to the foot of Princess Alice Mountain.

Prince Albert II, accompanied by Gildo Pastor, was there at the finish to welcome Xavier Chevrin and his team. An opportunity for the eco-explorer to share his first impressions, but also to reveal the first images from the expedition. A mission that will soon be visible in a documentary, as part of the Venturi Global Challenges.