After official visit to Serbia, Prince Albert goes to Sarajevo 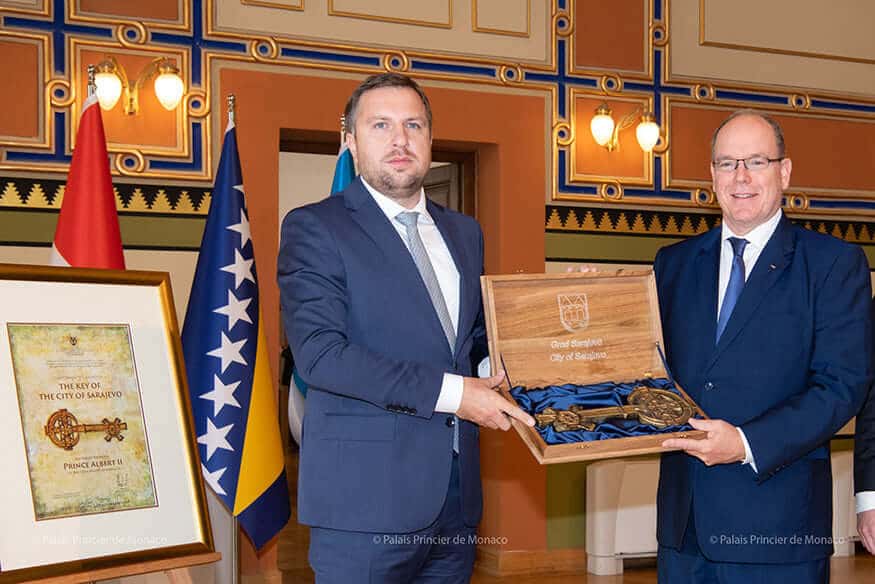 On 8 and 9 October, Prince Albert visited Sarajevo. He attended the inauguration of the capital’s Olympic Museum, as well as an official ceremony in the city’s town hall.

The Sovereign was invited to Sarajevo, the capital of Bosnia-Herzegovina, by Abdulah Skaka, the city’s mayor. There, the Prince attended the inauguration of Sarajevo’s newly renovated Olympic Museum. Opened in 1984 for the 14th winter Olympic games in Sarajevo, the museum was created to “highlight the Olympic spirit, Olympic values, creativity, and youth”.

The following day, Prince Albert took part in a ceremony in Sarajevo’s town hall during which he was presented with the city’s keys. “I am honoured to receive the Key of the City of Sarajevo in this symbolic place, I am honoured by this gesture,” said the Prince. The visit was also an occasion for the Prince to visit Sarajevo’s old town, including the historic Ottoman neighbourhood of Baščaršija, where the visited Prince the Gazi Husrev-bey mosque, built in 1531, the Ashkenazi synagogue (1591) and the orthodox church of Saint Michael and Saint Gabriel.

Prince Albert II of Monaco’s visit to Sarajevo’s follows an official visit to Serbia, the Sovereign’s first diplomatic trip since the start of the pandemic. The Serbian visit bore its fruits, including a new agreement on economic cooperation signed between the Serbian Chamber of Commerce and the Monaco Economic Board.