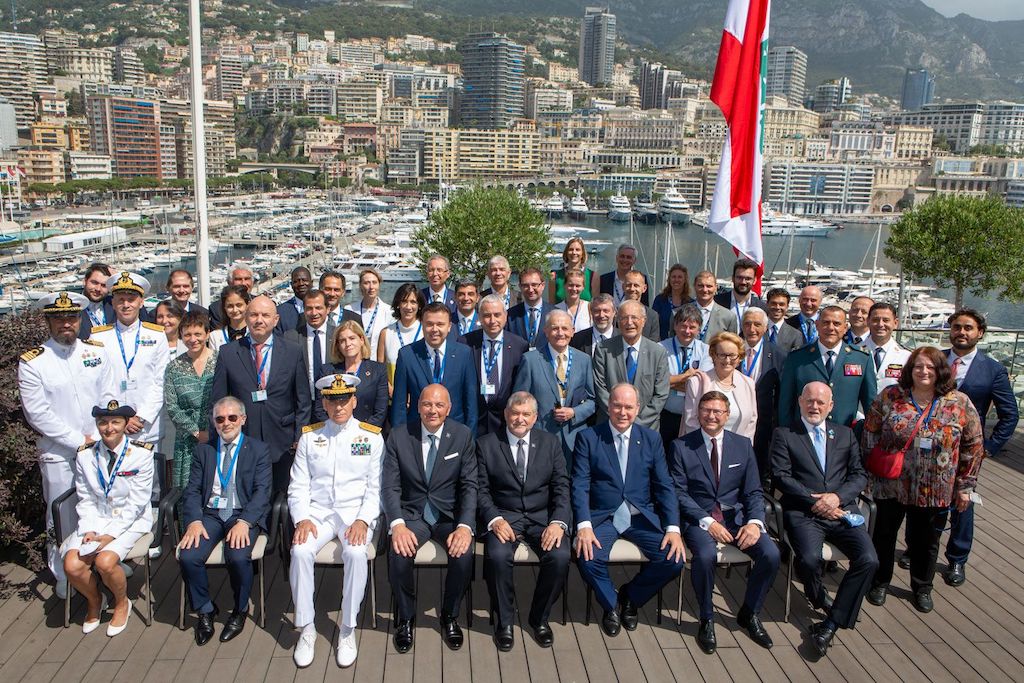 Whilst the seafloor may seem thousands of miles away, our lives are more closely connected with underwater goings on than you may realise. Predicting tsunamis, creating navigation routes for trade shapes and even disposing sea mines, hydrographers have an important job to do in working out what lurks below. But, did you know that these scientists understand more about the surface of the moon than our ocean floor?

On a mission to change this, IHO have united 94 countries, to share resources and create a global, digital database to collaboratively map out our ocean floor. Right from day one, back in 1921, at a time when “half the world were enemies”, IHO General Secretary, Dr Mathias Jonas, describes how the world put its animosity aside for our planet’s health. Today, the same question remains at the heart of the organisation: “What can we do together that we cannot do separately?”

Collaborate to “make peace with nature”

On the terrace overlooking the port, UN Special Envoy for the Ocean Ambassador, Peter Thomson, reminded the 40 or so attendees, as well as the international viewers on the YouTube live stream, that “our ocean’s health is in decline”. As pollution and global warming worsen, marine species are facing heightened threats. Moving forwards, it will only be once we have met the UN’s 17 sustainable goals that we will “make peace with nature.”

However, thanks to the IHO and their focus on global cooperation, all hope is not lost. A better understanding of the seafloor means we are in a better position to protect the species living there. As such, IHO is not just working with global governments, but industry partners too, as scientists develop cutting-edge ocean exploration devices.

Meet the new tech mapping out the underwater world

Whilst it may be difficult to imagine driverless cars travelling on our roads with nobody behind the steering wheel, if we dive underwater, this futuristic vision has become an everyday reality. Out in the deep blue, scientists are already using unmanned devices to help gain a better understanding of what lies below the surface.

ECA Group and ixblue are two of IHO’s industry partners both using autonomous underwater vehicles (AUV) to create a digital twin of the ocean. Displayed on the quayside during Monday’s event was the AUV A18-M: a 600 kilo, bright yellow drone using sensors to map out ocean mountains and ridges, take photos of the seafloor and detect sea mines. Once collected, this data can then be used to assist with building offshore structures, such as oil rigs.

According to a representative from ECA Group, this device, capable of reaching depths of 3,000m, is “super silent” it does not disturb marine wildlife. Not only this, but it is also equipped with “artificial intelligence to ensure it recognises obstacles, such as large rocks, and is able to steer clear of them.”

A fully mapped ocean floor by 2030

As we enter the UN Decade of Ocean Science for Sustainable Development (2021-2030), hydrographers have a huge ambition: to map 100% of the ocean floor by 2030. Known as the Seabed 2030 Project, scientists not only face the challenge of collecting all this data, but they also have the difficulty of making it user-friendly and accessible in real-time to the average mariner out at sea.

In the spirit of this coming decade, the Italian ship Amerigo Vespucci, used to train cadets from the Naval Academy in Livorno, docked in Port Hercule for the centenary celebrations. On Tuesday there will also be an official ceremony to declare it an Ambassador of the Ocean Decade. Boasting gold detailing on the hull and world flags adorning the masts, Officer of the watch, Lieutenant Frederico Messini, described the 90-year-old vessel as a “beautiful ship” capable of reaching “13 to 14 knots with wind.”

Testament to the IHO’s ambition to connect the world to save our oceans, the day’s celebrations ended with a webinar attended by almost 200 people from countries as far away as China and Brazil. Discussing the future of hydrography and the use of ocean data, Dr Geneviève Béchard, national hydrographer of Canada and Chair of IHO council, and Dr. Peter Heffernan, Ocean Ambassador, were amongst the guest speakers.