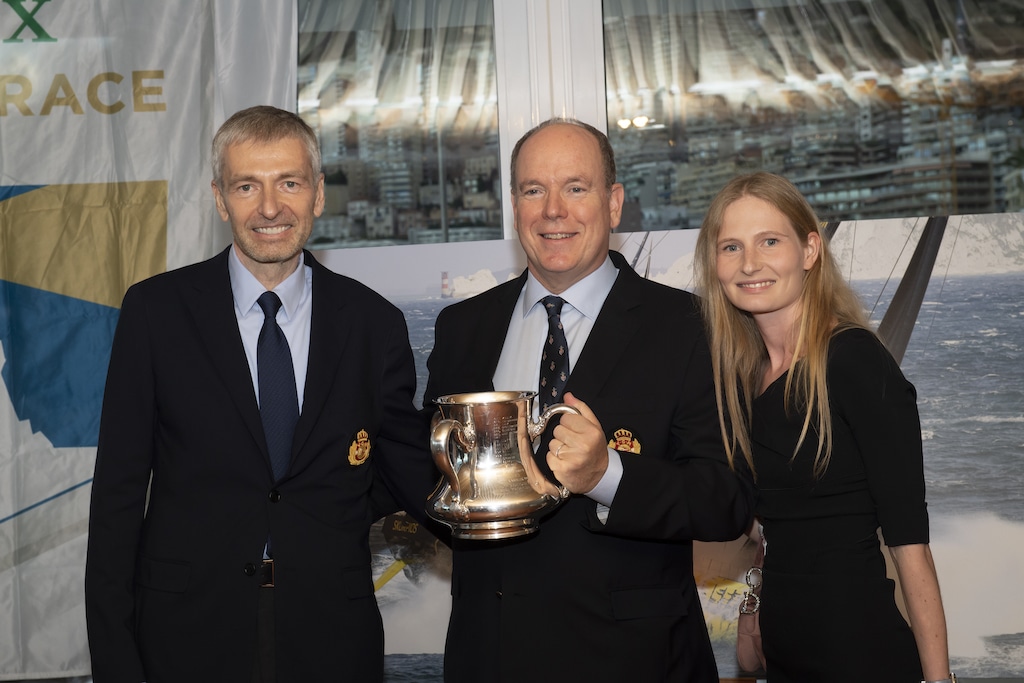 A symbolic gesture to honour the team’s impressive victory in August.

The ceremony took place at the Yacht Club de Monaco (YCM) on Monday 20th September, during an event honouring the Skorpios crew for their victory in the Rolex Fastnet Race in August. Dmitry Rybolovlev, owner and helmsman of Skorpios was accompanied by his daughter and Member of the Board of Directors of AS Monaco Ekaterina Sartori Rybolovleva, presented the Rolex Fastnet Cup to Prince Albert II, President of the YCM. This is the first ever victory for the YCM in the history of the Fastnet race.

Prince Albert II and Dmitry Rybolovlev congratulated each other and wished the Skorpios crew a successful career. Skorpios skipper Fernando Echavarri, world and Olympic sailing champion, was also present. He said he hoped “to see the crew return to the Yacht Club de Monaco with new victories.”

On 10 August, Dmitry Rybolovlev’s sailing superyacht and its 29 crew members crossed the finish line of the Rolex Fastnet Race in Cherbourg at 21:30 – for the first time, the race ended in a French port – after a frantic race of 2 days, 8 hours, 33 minutes and 55 seconds. The result has set a new record for monohulls.

The ClubSwan 125 Skorpios – to use the sailing boat’s full name – is the largest racing monohull in the world and the largest yacht to have participated in the Rolex Fastnet Race. Meticulously designed and built by the best builders with state-of-the-art equipment supplied by experienced suppliers, the Skorpios is a true technological marvel.

The yacht is the pride of its Finnish builder Nautor’s Swan, but also of its designer, famous naval engineer Juan Kouyoumdjian. According to him, “the boat is destined to open a new chapter in the history of water sports. Nautor’s Swan executives Enrico Chieffi (Senior Advisor) and Giovanni Pomati (CEO) were also present at the event.

A work of passion

Dmitry Rybolovlev, businessman, philanthropist, and president of the AS Monaco football club, has been a sailing enthusiast for many years. He is the helmsman of Skorpios, a ship he named after the Greek island belonging to his family.

The next international event for the Skorpios will be the Middle Sea Race in October. The race will start and finish in Malta, with a course of 606 nautical miles around Sicily.