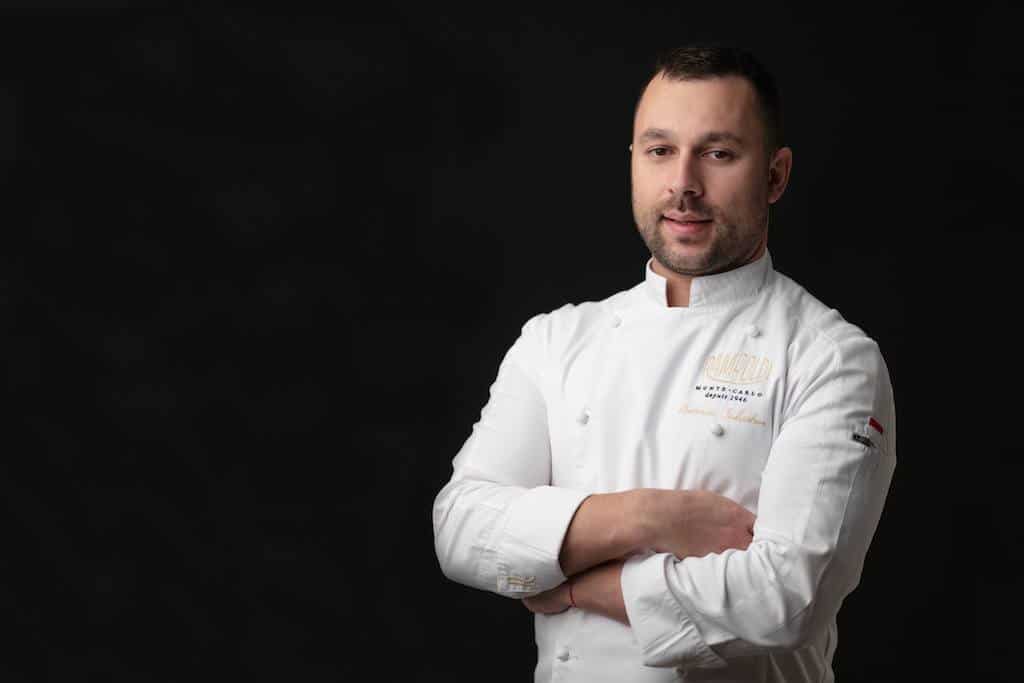 Head chef at La Table d’Antonio Salvatore in Rampoldi, Antonio Salvatore was awarded a coveted star in the 2021 Michelin Guide. The ultimate accolade in the culinary world, this award recognises his tireless pursuit of excellence. Born in Guardia Perticara, a small town in southern Italy, Antonio Salvatore worked in many restaurants before finally settling here in Monaco.

Italy… the home of Antonio Salvatore’s love affair with cooking. In the heart of Potenza, a town in the southern region of Basilicata, cooking is a way of life. Smiling, he explains that “whether you like it or not, you have to help prepare meals. During the week, we would go out to the garden and pick fruit, vegetables and herbs to be used in the kitchen.”

Growing up, cooking was a big part of his life and he soon realised he wanted to turn this love into a career. From a young age he was hooked. Following his passion, he enrolled in hotelerie school aged just 14. Here, he would hone his talents, master the basics and perfect his technique.

For chefs, travelling is a real culinary journey: a chance to delve into another country’s culture and learn about new ingredients, scents and flavours. Having travelled to some of the world’s greatest kitchens, aged 34 years old Antonio Salvatore is a real globe-trotter. He first began his overseas adventures in London, before moving to Juan Pablo Felipe’s Michelin starred restaurant El Chaflán in the Spanish Canary Islands. As well as this, he has worked in Florence, Milan, and even Russia, where he was contacted by a Vatican Ambassador.

Explaining his culinary adventures, he says: “every place I travelled to was full of new experiences. If you dare to try something, you will always learn. I felt like I had to travel if I wanted to keep learning.” Here in Monaco, a country measuring just 2km2, Antonio would make one, if not the greatest, achievement of his career.

Thriving on a challenge, Antonio Salvatore came to work in Monaco in 2016. Not just anywhere in Monaco, but one of the most historic restaurants in the Principality: Rampoldi. Smiling, he explains: “when this opportunity came my way, I didn’t think twice. I discussed it with my wife, who supported my decision, and then we moved over here.” As soon as he pushed open the restaurant’s doors, his passion ignited. “All those childhood feelings rushed back to me, it was just like being back in the garden picking fruits and vegetables when I was little. I felt so at home here.”

In September 2020, Antonio launched La Table d’Antonio Salvatore, a Mediterranean inspired menu put together by him and his team, to be served in a brand-new dining room below the gourmet restaurant Rampoldi. Delighted by the achievement, Antonio described how “this was the final result of a project particularly close to my heart. I want to offer guests a culinary experience like no other, whether that be at Rampoldi or at La Table d’Antonio Salvatore.”

Driven and determined, this chef pays close attention to small details. “Since falling in love with cooking, I haven’t stopped working, learning or exploring. It was incredible when I saw on TV that I was going to earn my first Michelin star with La Table d’Antonio Salvatore at Rampoldi. This is the reward that every chef dreams of earning one day. It takes years and years of hard work. All the sacrifices I’ve made have finally paid off. I might be the one receiving this accolade, but I could not have achieved any of this without my amazing team or the continuous support of guests dining with us…”

>> READ ALSO: How the pandemic forced top Riviera chefs to reinvent their menu

Although rewarded for his hard work, the chef who puts 100% into everything is not about to rest easy. Giving his all to everything he sets his mind to, Antonio Salvatore will continue to bring this attitude to the kitchen. After all, this mindset has seen a little boy living in southern Italy grow up to become the star of one of Monaco’s most prestigious restaurants.

>> READ ALSO: “World’s best chef”: Mauro Colagreco is conquering the Riviera, one city at a time